skip to main | skip to sidebar

Sooooper ITM (In the Moment) 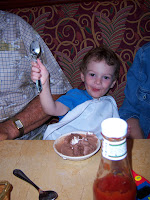 If I could choose a super hero power, I wouldn't choose mindreading, or superhuman strength. I wouldn't even choose shapeshifting or the ability to become invisible. I would choose being IN THE MOMENT. In the moment, every moment, all of the time. If you've ever tried to stay "in the moment," you know how hard it really is.

I have always believed that this is why children have so much energy. As adults, we are always in awe at how much energy kids have. Well...it's because they are always IN THE MOMENT. They never worry about what so-and-so said OR what they need to do tomorrow. They are constantly present. I find that when I can attain this phenomenon, I, too, have a lot of energy. I'm positive it is because I'm 100% in the moment.

This is something I've been working on for over 10 years now. I'm pretty good at it, actually. But, on occasion, I will still feel myself drift away and miss half of the conversation - I'll miss the moment. I'll have to pull myself back.

In the playroom with Ross, it is crucial to be in the moment. Ross has this uncanny ability to know when you are not.

Although I'm certain I will always be a work in progress, I will put that SuperITM cape on and do my best to be in the moment...always.
Posted by Lorna Miller, Son-Rise Program Mom at 2:25 PM No comments:

Ross puts the AWE in Autism 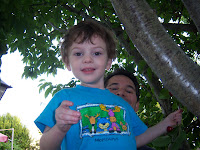 "I want a piece of round bread!"
It took Ross about 20 times telling me this before I realized he wanted one of his glazed gluten free donuts. It was as if I were torturing him. So in order for me to stay true to making him eat something halfway healthy (being the good mom that I am), I made him eat a piece of his gluten free bread before I'd give him the prized donut.
After many dramatic, yet small, bites of his bread, I finally gave in and gave him the donut. He instantly charged out of the kitchen in a big grump.
I was nonplussed since this is not a new phenomenon at our house and so I sat back down at the computer desk to organize some paperwork. A few seconds later, a little head peaked around the corner and said, "I love you."
Ross toodled over to me, grabbed my arm, leaned against my shoulder and cuddled with all smiles. I kissed his little head and thought about how far we've come. How wonderful. He then looked up at me and announced, "How 'bout we hug the donut?" Yes, Ross, let's do that! This, of course, made me laugh out loud!
He toodled out of the room and we went about the evening. Bathtime. Storytime. Bedtime.
With Ross sound asleep, I started straightening up and I found the uneaten "round bread" on the coffee table — with all of the glaze sucked off!
Ross really does put the AWE in autism. And don't think for a second that I didn't eat the rest of that darn donut!
Posted by Lorna Miller, Son-Rise Program Mom at 8:41 PM No comments:

"What do you see?" I asked Ross as he was looking through his play telescope and I was holding up two of his bouncy balls.

I quickly exclaimed, "Planets! Watch them go 'round and 'round!"

The Son-Rise teacher stopped my video. "Why did you answer the question for him, Lorna?"

Certainly this was going to be something I would work on. PAUSING. Sure enough, if I pause long enough or simply ask Ross again, he answers me! And, of course, that means I get to celebrate it and then Ross has the incentive to answer me faster the next time. This actually works! The techniques I learned at Son-Rise actually WORK! It's so exciting!

So it is the belief that Ross will answer me that helps me help him. This is such a simple concept! I can take it further...if I believe Ross will recover, then I will do everything I need to do to make that happen. I won't ever stop, because I believe.

If I believed everything I've read and everything the "experts" have told me, I could probably just give up now. The truth is, nobody, no matter how well intentioned, knows what Ross is capable of. I'm finding my life MUCH MORE FUN to simply believe.

It really is the first step. Believe.

Whatever it is you want in life, believe you can have it.

Whatever it is you want to do, believe you can do it.

It is in the "beliefs" where you create your life...
Posted by Lorna Miller, Son-Rise Program Mom at 3:58 PM No comments:

When Ross was diagnosed with Autism the only thing I knew to do was to read. This is not always the best thing, and, quite honestly, I should not have done it. But I wanted to make it alright, as all mothers want to do.
All of the books described what they called "stims." It's short for self-stimulating behavior. You know, like flapping of the hands or rocking back and forth. Ross didn't do these, so when any of the doctors or therapists asked if he had any stims, I always said no.
For reasons I'm not sure of, the folks at Son-Rise call these stims, "isms." It was not until they defined them for me, that I finally understood it. Isms are anything that Ross does that is repetitive and/or exclusive. Anything. So when I left Massachusetts I realized Ross had a ton of isms. I even recalled his early ones. The ones he did before we had a clue.
One hilarious ism was when Ross first began to stand and walk on his own. He would stand there staring off into space or watching television and play with his belly button! We all thought this was too cute, of course. Ross would also just lie on the floor wherever we went and just hang out there, checking everything out. In fact his first few weeks of preschool his teachers would ask me how much sleep Ross was getting at night because they thought he was tired. He just liked the view from the floor, I guess!
After I understood that isms were repetitive and/or exclusive, I would watch Ross with a different eye. Even though he would push his cars back and forth he never wanted me to do it with him. Exclusive. And although he loves to have me act out his videos and books with him, he does them over and over and over again. Repetitive.
And here's the deal...we all have isms! Yep! When we are checking our e-mail, surfing the Internet, watching t.v., twirling our hair, daydreaming — we are being exclusive/repetitive. When someone comes along and tries to pull us from our ism, it is a little annoying, but being neurotypical, we can transition. Those with Autism can't. That's the difference.
While most current "therapies" suggest that these repetitive behaviors are inappropriate and try to extinguish them, Son-Rise has a completely different approach. They feel that kids with Autism ism to somehow take care of themselves. For instance, when they have sensory overload they might check-out by isming. So Son-Rise has you join them!
And if you think about it, joining them is the perfect way to tell them some very critical things. Like that you love and accept them for exactly who they are, right in that moment. That you like the things they like. When you join anyone in the things they love, you instantly bond with them. It is no different with these children.
And almost magically, eventually the joining builds a bridge. Ross is becoming less and less exclusive right before our eyes and all we've done is JOIN HIM!
We are learning now how to take it to the next level — building upon the joining and then asking more from Ross, but it all begins with building that trust first. Joining does this.
Think about it, if all anyone ever told you, all day long, was that you needed to change...would you want to be a part of that world??
All I know is that I'm learning to LOVE and RESPECT my child as a human being. I want to take that from the playroom and incorporate that in all aspects of my life. LOVE and ACCEPTANCE...what the world would be like if we all were to live like that. Hmmm.
Even if Ross never recovers from his Autism, I know I'll love him and I'll join him. It gives me so much joy to do so.
Posted by Lorna Miller, Son-Rise Program Mom at 3:13 PM No comments:

Lorna Miller, Son-Rise Program Mom
My name is Lorna. My five-year-old son, Ross, was diagnosed with Autism Spectrum Disorder in November, 2008. I'm learning to LOVE Autism and this blog illustrates my thoughts and reflections while we are on this incredible journey!